Last night, we debuted two new songs at The Harley in Sheffield. Certainly one of them will most likely appear on our next album, which you may or may not have read in previous posts, will be an exploration of Philadelphia in the 1840s and 50s. The newest of these is still a work in progress and takes the perspective of Robert Purvis, a black abolitionist leader, who, following a riot in which houses and churches of African Americans were burned and destroyed, walks through the destruction. The riot had begun when the parade of the Negro Young Men's Vigilant Society was attacked, as they celebrated the abolition of slavery in the West Indies. Rioting lasted for two days before the militia stepped in.

The song itself isn't about the riot as such but more the aftermath and the impact it had on Purvis. After the riot, he wrote in a letter to white abolitionist Henry C. Wright, "Press, church, magistrates, clergymen and devils are against us... I am convinced of our utter and complete nothingness in public estimation." That sentiment of dejection struck me, and I wanted to in some way to portray someone who feels hated by so many people around him, completely separated from justice or any belief in fair treatment by the authorities. Purvis felt the stinging injustice of Philadelphia's treatment of its black population and the comment above feels like a point of desperation. As in so many of my songs, I'm imagining what someone might be feeling and one theme I explore is the idea of a how he might have imagined revenge. Purvis supported temperance societies and women's suffrage and undoubtedly never saw violence as a means to enfranchisement. Indeed, he appealed to the state legislators to turn back recent state laws that deprived blacks of the vote in his "Appeal of Forty Thousand Citizens Threatened with Disfranchisement." However, as with a lot of my songs, I'm looking for the unseen or undocumented possibilities. The character in this song, in his "darkest hour", imagines an "orgy of violence" as he torches "the city that scorns him." The opposition that Purvis faced in his attempt to restore the rights of the black population was in some way informed by a fear of a black uprising, following Nat Turner's violent slave rebellion in 1831, which panicked the white population throughout the country.

'Paris of America', the more complete of the two new songs, looks at the bourgeois fear of an uprising from the city's violent and "savage" poor. Characterised as such by both the wealthy and the missionary portions of the city, plans to beautify the city with boulevards and fountains were one way of civilising what they saw as a degraded underclass. Consolidation of the city and its suburbs in 1854 also brought with it a police force with greater powers in an attempt to bring this violent period to a close. As in other growing urban populations, dramatised accounts of violence gratuitously sensationalised the participants and it is this perspective the song takes. The narrator acts somewhat like a tour guide taking a gentleman and his lady through the "slum" area of Bedford (which was grotesquely characterised in the picture above by the Bedford Street Mission), warning them of the dark unseen underbelly, "just around the corner", as Bedford Street was indeed just a few blocks from the grand Broad Street. 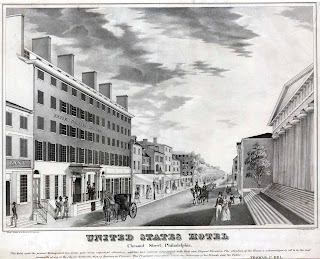 As many of the paintings of sketches of Philadelphia around this period were more often intended as a postcard to promote a grand and sophisticated metropolis (see the painting to the left of Chestnut St), I thought it would be interesting to recreate sketches of streets like Bedford in a more realistic way, if that is possible, and it's something I'm looking into for our project. For the time being, these are two of the "hooks" of Philadelphia I've found and managed to create a couple of different perspectives from. In terms of giving a broad view of Philadelphia life, I'm hoping to continue writing about the distinctive cast of characters that make up this heterogeneous urban metropolis. It's certainly what makes the city such a fascinating subject.

Hello, I'm Pete David and I write songs for The Payroll Union, a UK Americana band. This blog is about the songs I write and the subjects I cover, which are primarily characters and stories from American history. If you want to know more about the band, see the link below.

We can heartily recommend...